Ten years ago today one of the very first battles for marriage equality in Australia was fought. It was a small, quiet battle between two same-sex couples and the Howard Government. It started in the Victorian Family Court and ended in federal parliament. And it saw the joyous, hopeful and affirming celebration of two same-sex marriages turn into the Marriage Amendment Act 2004.

The Act defined marriage specifically as the union of a man and a woman to the exclusion of all others, and added a new clause:

A union solemnised in a foreign country between:

must not be recognised in Australia.

A year before, I had married my partner, Sarah, at her family’s cottage by Lake Catchacoma in Southern Ontario. When we returned to Melbourne lots of people asked us whether our marriage was recognised here at home. Not really, we said, but it’s all a bit unclear. Some clarification as to our legal status would be good, we thought.

At about the same time and unbeknown to us, a gay male couple, Jason and Adrian – who had also married in Canada – had returned to Melbourne and were wondering the same thing. A mutual friend put us in touch and we came up with a plan.

First, we made some enquiries at Melbourne Uni law school where a number of staff were keen to take up our cause. A lecturer spoke to a solicitor, a solicitor spoke to a barrister, a barrister spoke to a QC and we all ended up in the QC’s law chambers in the city. We had a fantastic team of people all providing their services pro bono.

Paul Vout, Kris Walker, Peter Hanks, Jason and Adrian and Sarah and I sat around a table and discussed how we could use our Canadian marriages to further the cause of same-sex marriage in Australia. (Well, the legal people sat around and discussed it; I’m not sure the rest of us did anything much at all.) This was all very new, remember, and long before marriage equality was really on anybody’s radar. 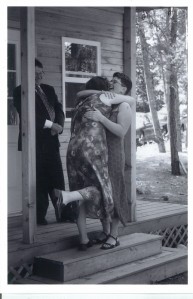 At that time, the legislation did not specifically define marriage as between a man and a woman, nor did it bar the recognition of an overseas marriage between two people of the same-sex. This meant that the legislation was, at least, ambiguous and could, at best, be interpreted in our favour.

To be honest, I don’t recall the details of that meeting, but I do remember leaving the chambers with a sense of excitement about the possibility – however remote – that our Canadian marriage might actually be recognised here at home, and that the whole process might generate some publicity around the issue; funny to think there was a time when same-sex marriage wasn’t all over the media.

The best course of action, it was decided, was to seek a declaration as to the legal validity of our marriage in the Victorian Family Court. Sarah and I had already started a family, and Jason and Adrian were planning theirs and we wanted some clarification as to how we would be regarded as we went about our daily lives, especially in relation to our kids.

The legal team did their stuff and a date was set for our hearing in the Family Court, 23rd August, 2004; ironically, our first wedding anniversary.  The more people we spoke to, the stronger our case seemed to be; the legislation didn’t say we couldn’t get married and it didn’t say our overseas marriage couldn’t be recognised. We were at least in with a chance.

But as the day of the hearing approached, we were notified by our legal team that the matter had been tabled for discussion in federal parliament. Clearly, the government had worked out that they were on shaky ground and in the second week of July there was lengthy debate over the Marriage Amendment Bill.

To be honest, Hansard for those few days makes grim reading and I only hope that in a few years’ time many of the people who spoke will look back on what they said with some embarrassment. There were some great speeches too, and Senator Brian Grieg’s shone a light in a dark place.In the middle of his speech, Greig said:

There are at least two test cases before the Australian courts seeking a declaration of a same-sex marriage conducted overseas and, contrary to the dishonest claims of antigay groups, that is not a political action by the mythical and militant gay lobby to undermine the very foundations of society but an action by two very unassuming couples who engaged the courts out of their own volition. I have not met either couple. One of these couples includes a Canadian national, a person whose marriage is lawful in Canada but about to become unlawful in Australia—a ridiculous situation. 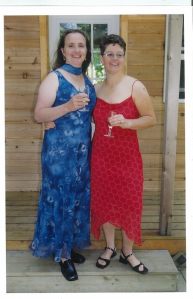 On 16th August, 2004 – exactly one week before our hearing – the Marriage Amendment Act 2004 received royal assent, passed into law and made our legal challenge redundant. There was absolutely nothing else we could do. We were hugely disappointment and a little astonished that our desire to clarify our marital status had bought about a change to Commonwealth legislation.

After the case, Jason went on to set up Australian Marriage Equality with a small group of campaigners and to co-ordinate Midsumma Vows where he – in his professional capacity as a marriage celebrant – publically married dozens of couples, and helped push the issue up both the mainstream and queer agendas.

In January this year, Jason launched the Australian Equality Party (AEP) to provide the LGBTIQ community with an independent voice inside Federal Parliament. The AEP is currently being registered by the Australian Electoral Commission.

On the day we got married, a friend asked how long I thought it would take for our marriage to be recognised in Australia. I remember saying that five years seemed too soon, but ten years didn’t seem unreasonable and although we still haven’t achieved marriage equality, the change in that time has been phenomenal. Just this week there is again talk of a Liberal conscience vote which – if it happens – will take us one giant step closer to that final day.

In our family, the kids are already planning for that day. Just last week my seven year old said: Mama, have they changed that law about marriage yet?

No, sweetheart, I said, not yet. We’re still working on it.

When they do, she said, can we have a day off school. And maybe a party?

And check this out: Love on the frontier. Great fun!